POV-Ray : The Power of Ray Tracing

Have a look at the below photograph of a busy city, Just click on it and open the larger version and see the details. 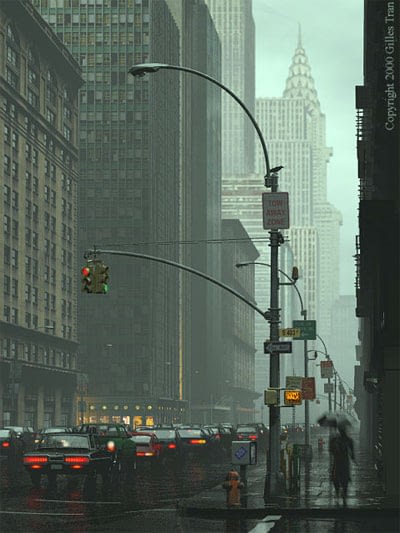 Would you believe me if I tell you that it’s an artificial graphic created with the help of a computer program, by applying millions and even billions of complex mathematical calculations? Believe me it’s pure mathematics which rules over creativity and in-born talents like ability to paint, draw or sculpt. This wonderful mathematical model is called Ray-Tracing.

Ray-tracing is a method of creating visual art in which a description of an object or scene is mathematically converted into a picture. In more specific terms, ray-tracing is the process of mathematically generating near-photorealistic images from a given description of a scene via geometrical modeling of light rays.
One of the most important factors which I believe about computer based ray-tracing over traditional art forms is that it does not require in-born talents like drawing or painting skills which in some cases requires years of hard work to master, but here it places the burden on a computer program called POV-Ray.

So, what is POV-Ray?

The Persistence of Vision Raytracer, or POV-Ray, is a high-quality, freely available ray-tracing software package that is available for Windows, Mac and UNIX platforms. Yes of course, it’s free! If you’re a programmer interested in POV-Ray, you can even pick up a copy of the source code without charge. POV-Ray is definitely one of the most commonly used ray-tracing software to date, because of its relative ease of use and powerful features.

Instead of calling it a software, POV-Ray is more of a rendering engine, which means it takes a file as an input and gives the output after rendering it without much help in the way of a user interface.
Describing scenes to POV-Ray is fairly simple. We give POV-Ray, a file containing a description of every object in the scene, written in the POV-Ray language (Click Here to see a sample piece of POV-Ray code). Each object’s description consists of:

1. What type of object you want (one of POV-Ray’s simple objects or one you’ve created yourself); and
2. Various attributes of the object (its color, how it reflects light, etc).

POV-Ray takes this file and generates a picture, which you can then view.

Please go through some amazing ray-traced images  created with POV-Ray. Click on these images to view it’s larger version.

I’m sure, if you are a graphic geek you will definitely look for the POV-Ray download link now. Here it is…

The latest version of POV-Ray can always be found at http://povray.org/download/ You will have to download the correct version for your computer (there are versions available for most operating systems) and to set it up. The current official version of POV-Ray for the Windows platform is 3.6.2, which was released on 1 June 2009.

Now don’t think that creating a photo-realistic image using POV-Ray is as simple as creating an image using photoshop. For example, the beach pebbles picture shown above took 4.5 days to render on an Athlon 5600+. In their journey, the light rays can be reflected by mirrors, refracted by glass, or undergo various other contortions, all of which result in a single pixel of the final image. Because the ray-tracing software must trace one ray of light for each pixel in the output image, and because the light rays can undergo so many contortions, the process of ray-tracing can take a very long time, depending on the size and complexity of the image and the processing power of your computer. Unless you have an extraordinarily fast computer, you will most likely find yourself waiting around impatiently for your scene to finish rendering once you’ve begun to ray-trace. POV-Ray is unique and special because of its ray-tracing abilities and powerful Libraries. It requires real passion towards mathematical modeling and continuous hard-work to master this great tool. At the same time its pointless to compare POV-Ray with modern 3D tools with glossy UI.

14 thoughts on “POV-Ray : The Power of Ray Tracing”