Chrome vs Firefox – How chrome overtook firefox this time

My blog turn 2 year old today, at this point I would like to present some quick interesting browser statistics from my server logs that goes along the lines of a global scenario.

The browser wars are heating up once again with the latest news release from StatCounter indicating Google’s Chrome browser overtook Mozilla Firefox as the second most popular browser worldwide for the first time. The competition among web browsers for the supremacy in usage share has perhaps started during the late 1990s by Internet explorer through replacing Netscape as the dominant browser. Ever since, Internet Explorer has been in the top position despite strong competition from the likes of Mozilla Firefox, Google Chrome, Apple’s Safari and Opera. As we all know, the main reason behind the popularity of IE is the acceptance of Windows OS among common man. Even today, we could see so many people around us for whom a ‘browser’ means Internet Explorer.

Although Internet Explorer started this year with a market share of around 60%, reports shows that the market share has dropped to 52% this November. The gainer here is primarily google chrome.

But it’s completely a different scenario among us web designers and web design blogs, Internet explorer has already been on the back track and here the competition was between mozilla firefox and google chrome for the prime spot. Chrome has been steadily and consistently rising since its introduction back in 2008, and has already surpassed the browser share of Firefox. Hence after reading the statcounter report on chrome overtaking firefox to become the second popular browser, I decided to give a quick look at my visitor logs. The outcome was quite surprising.[ad#ad-1]

Given bellow is the browser usage statistics for my blog for the past 2 years. 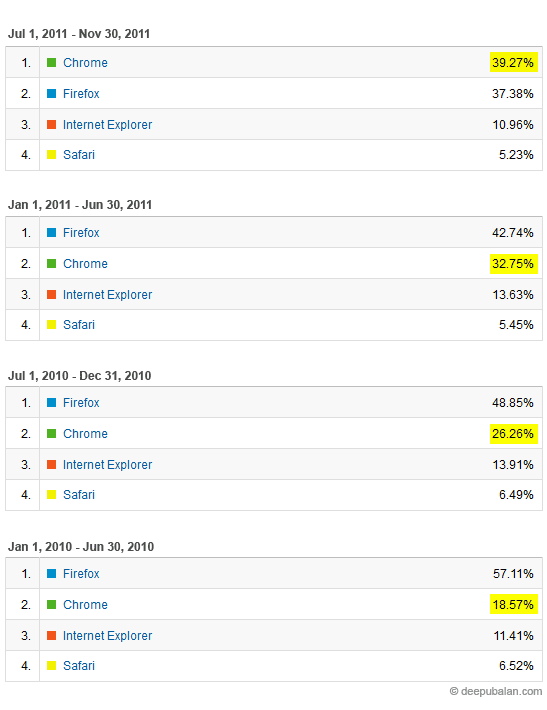 The statistics clearly shows the clean and steady growth of Chrome over Firefox. My blog statistics for this November clearly goes in line with the global scenario.

Personally I love both Gecko and Webkit, both of them provide greater flexibility and support in its own way for CSS3 and HTML5 day after day with each release. It’s because of these modern browsers, we got the freedom to think beyond photoshop. So firefox or chrome that doesnt bother me at all. I am longing for the day when any of this browser surpass Internet Explorer globally to became the top most popular browser.

How to Optimize Digital Marketing Strategy for Better Conversions?

The Smart Phone vs the Computer