Why Responsive Design Should Be Your Prime SEO Strategy?

With an increasing majority of internet users coming from smartphones and tablets, it has become vital to have a website which can work flawlessly across different platforms and devices. This is where designers swear by the utility of responsive web design. However, online marketers or more specifically SEO guys have their own views about it. Here is what they think.

Responsive Web Design exploded onto the scene in early 2012, and since then has become increasingly important in the wake of increasing Smartphone and tablet adoption rate. RWD has established itself as the best way to design a website which mobile visitors love. It would be surprising if anyone would need an introduction in responsive web design, but nevertheless, RWD means that a webpage reformats itself as per the device on which it is being viewed. Thus, even if it is viewed on a tablet, or a smartphone, or a tablet computer, the website remains user-friendly.

However, SEOs are more concerned with traffic and keyword ranking than anything else. So why responsive design is making so much of noise in the online marketing scenario? 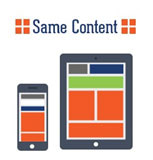 Earlier, all that most SEOs would care about is getting high rankings in Google search, a task to which they took in all earnest and didn’t shy from using manipulative search engine tactics. However, as time progressed, search engines became smarter and more committed towards providing the user with best answers to their query.

As a result, the focus shifted slowly and steadily towards engaging the user and making him stay on the web page, and this is how user experience became an important metric to judge a website’s usefulness. Search engines use data to observe how people engage with web pages, which helps them judge the quality of the pages themselves. Usability and user experience are second order influences on search engine ranking success. Obviously, no one would like to link to site which has a bad reputation for its crummy design.

With mobile traffic increasing its market share, it has become imperative for business owners and companies to have a mobile version of their websites. And that’s why we are witnessing a wider acceptance and adoption of responsive design.

When someone asked Google’s spam engineer Matt Cutts about responsive design’s relevance for SEO, the reply was,

“In general, I wouldn’t worry about a site that is using responsive design losing SEO benefits because by definition you’ve got the same URL,” Cutts said. “So in theory, if you do a mobile version of the site, if you don’t handle that well and you don’t do the rel=canonical and all those sorts of things, then you might, in theory, divide the PageRank between those two pages. But if you have responsive design then everything is handled from one URL, so the PageRank doesn’t get divided, everything works fine.”

Thus according to Google, responsive design is a smarter way to go about doing SEO for sites, because a separate mobile version has greater chances of having issues if it’s not implemented well.

Benefits of RWD for SEO

Google is the king-of-all when it comes to deciding the future SEO marketing strategy for a brand. With 67 percent market share, no one can afford to ignore what Google wants or recommends. According to Google, using responsive design is industry best practice while designing mobile sites. This is simply because responsive design sites have one URL and the same HTML, regardless of device, which makes it easier and more efficient for Google to crawl, index and organize content.

Low maintenance
Having two different websites, one desktop and the other mobile requires having two separate SEO campaigns, which again requires more resources. While it is a good thing for the SEOs, as more SEO jobs are created, however, for the organization or the brand, it’s more akin to wastage of precious time and financial resources. Besides, managing one site and a single SEO campaign associated with it is any day far easier than managing two sites & two SEO campaigns.

One site = One URL
One of the biggest drawbacks of having a separate mobile site is that the concerned SEO will have to build the authority of the site from scratch, which means a lot of work, and on most occasions, mobile sites fail to rank well as they are canonicalized to their desktop counterparts. Responsive design tackles this problem by enabling you to maintain the same set of back-links, which means all your links will be directed to the same domain, giving the site a jump in the SERPs.

Low bounce rate
Mobile websites often suffer from the problem of high bounce rate owing to the non-optimized design, or a content which is too different from the desktop version. Google takes this a negative signal, equalizing the high bounce rate with non relevant content and thus penalizing the site with drop in rankings. A responsively designed website presents the same content as found on the desktop version, which makes sure the visitors receive the same information what they are looking for, irrespective of device.

Saurabh Tyagi is an online media enthusiast and avid blogger who closely follows the latest SEO, and online marketing trends. He writes about various related topics such as job opportunity in SEO, web designing and content marketing amongst others

5 Mistakes to Avoid When User Testing Your Mobile App